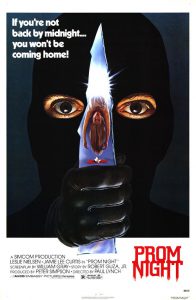 Apparently I wasn’t a Jamie Lee Curtis Fan Boy. Despite my horror geekiness spawned in the mid-’80s, i’d never seen seen terror train, nor prom night – the two big post-Halloween, Curtis starrers. Well, I’ve finally seen Prom Night, and, well… meh. I know had I been on the bandwagon then, I’d have followed the progression, but my parents wouldn’t let me watch “those movies,” nor could i blame them since, at 10, these 1981 slasher films caused them as many sleepless night as i had. but this entry is, at least from a nostalgic-friendly, modern-aware review, at best, meh.