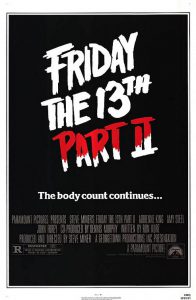 I wanted to stick with films I hadn’t seen before, but Netflix is skimpy on the instant films, and I was jonesing. Plus, after watching The Prowler, this one was stuck in my head. Still one of my faves of the franchise. And this is one of the films in this year’s lame Fear Fest lineup on AMC, so I figured I’d watch it (relatively) uncut rather than catch it on basic cable.

THE BET gets an overhaul