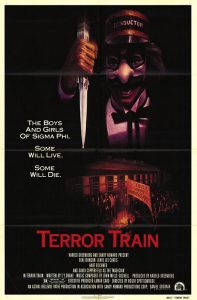 LAME!
I can’t even describe how pissed off I was at this film – another I had managed to never see, despite watching some horrocious dreck. Two words: David Copperfield. I think he still does the same lame flourishes now. I wanted to punch him the way I want to punch Criss Angel. Douche.
Besides that, I had no idea whee these people were in the train, where they were going, why the train was “checked,” but they just walked past the drapped sleeping area; why the conductor had to be a magic ‘tard, it all just felt so lame. I wanted to punch myself for watching it. Maybe it was good in the salad days of the slasher and Jamie Lee Curtis, but barely. If this had been my first slasher film, thing could have been a lot different.