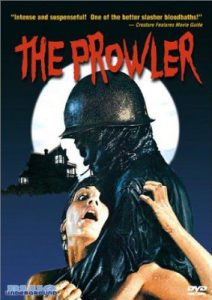 This is a toughy. A slow start with the newsreel footage and endless reading of the “Dear John” letter. But finally some good gore with the pitchfork kill of two young and sexy folks – which made me think, “Gee, I wish they hadn’t cut down the spear to the back of the making-out couple in Friday the 13th Part 2.

Then we meet our lead, the Final Girl (obviously), and I think, “She looks so much like Amy Steel, the Final Girl, Ginni, from Friday the 13th Part 2.

Some bad acting and some good FX (thanks to Tom Savini) later, and Amy-wannabe is under a bed, hiding from the killer and a rat comes up to her (just like in Friday the 13th Part 2 – though the weeing part isn’t here; makes me think a spy didn’t get to see the second unit of the pee scene). Anyway, there’s the obvious twist, which I still don’t understand. A final showdown (with a broken pitchfork that Final Girl uses to defend herself, just like Friday the 13th Part 2). Lots of blood. And it was a great timewaster.